Menu
A Hampton man donated his kidney to a stranger and his father received one in return. 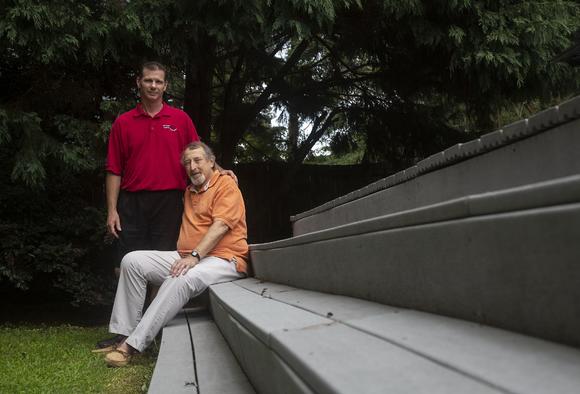 John Byrum needed a new kidney. He was going through dialysis three times a week.

An alternative education teacher at James Monroe High School in Fredericksburg, he would spend four hours at the dialysis clinic after work.

It can take up to five years for someone who needs a kidney to get off VCU Health’s Hume-Lee Transplant Center list. So Byrum’s stepson, Tom Onoff, volunteered to be a donor.

Blood tests determined Onoff wasn’t a match. But a program through VCU Health allowed him to donate his kidney to his stepdad anyways — sort of.

It’s called a “paired exchange,” said Dr. Dhiren Kumar, the center’s living donor kidney transplant medical director. If someone has a kidney donor with whom they are incompatible, they can swap donors with a stranger.

The program has been around the past few years. But last year, VCU Health got a matching software from the Alliance for Paired Kidney Donation that has increased matches. The software looks at factors like age, height, weight and blood type.

There have been roughly two to four paired exchanges in previous years. This year, there’s been at least eight so far, Kumar said.

If they’re unable to find a local matching pair, they turn to national lists from the Alliance for Paired Kidney Donation or the National Kidney Registry. Kumar said VCU Health has participated in paired exchanges where people in Minnesota, Baltimore and Virginia are all involved in one swap.

Because of the paired exchange program, Byrum was on the transplant waiting list for less than a year.

One June 28, the day of the operation, Byrum and Onoff got to the hospital at 5:30 a.m. They rode the elevator up to the eighth floor, where they were scrubbed and shaved. The next thing they knew, they woke up in the operating room, Onoff without one of his kidneys, and Byrum with a new one.

All the surgeries happened simultaneously, said Maureen Bell the transplant coordinator. Two donors went into the operating room with a recipient. When the first donor went to the recovery room, the second recipient was brought in.

“Basically, four people went to the OR and four people came out with one working kidney,” she said.

The kidneys will work in the recipients’ bodies for more than 20 years, Bell said.

Byrum said what he’s most excited about for recovery is returning to teaching in September. That, and not spending 12 hours a week in a dialysis clinic, he says.

“There’s 12 hours to do something else enjoyable,” he said.

Onoff, an avid tennis player and director of the Hampton Tennis Center, is looking forward to playing again.

Soon, they hope to meet the other pair in their swap. Bell said in a couple months, the center will organize a meetup with their surgeons and doctors.

Onoff said the decision to donate his kidney was easy.

His brother had donated his kidney to his sister 11 years ago. Onoff said her life has been “100 percent better” since then, and he wanted the same for his father.